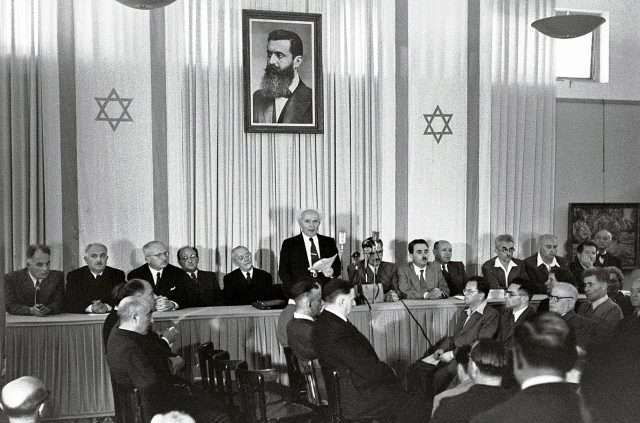 Due to the regional dynamics and considering its security, Israel has always adopted a domestic policy as a function of its foreign policy and vice versa. Although the external threats have changed during the decades, now and in the future, Tel Aviv will continue to adopt interlinked domestic and foreign strategies.

President Dwight Eisenhower once famously stated that Israel’s foreign policy is Israel’s domestic policy and vice-versa. The logic behind this statement was reasonably straightforward. For a long time after the Israeli Declaration of Independence in 1948, the Jewish State has been confronted with a geopolitical environment that was downright hostile to it. Not only that, but even internally, due to the threatening Palestinian presence, Tel Aviv adopted a firm security policy that would ensure the survival and well-being of the State. In so doing, Israel has adapted to the dual internal-external threat that has dictated its intermestic policy since 1948. It does not matter if the existential threat to Israel formerly represented by the Arab League has now vanished, replaced by the assertiveness of the Islamic Republic of Iran. Like yesterday, Israel can only think of its internal policy as a function of its foreign policy and vice versa. And if Israel is to survive, it will continue to do so.

Israel’s response to the Ukraine War

As this short article is being written, a conflict has continued in Eastern Europe for almost three months. This is, of course, the Russian-Ukrainian conflict, unleashed by the Kremlin to make room between itself and the Atlantic bloc. The Israeli coalition government chaired by Premier Naftali Bennet has chosen a diplomatic strategy based on equidistance between the parties involved in the conflict. So far, Tel Aviv has shipped to Ukraine exclusively medical equipment and sent aid packages for civilian use.[1] At the same time, it has resisted supporting Ukraine’s resistance with either offensive or defensive military pieces of equipment, which the Ukrainian Ambassador to Israel, Yevgen Kornyichuk, has repeatedly demanded.[2] On the diplomatic level, Israeli Premier Naftali Bennett has also prudently (and knowingly) avoided openly condemning the Russian intervention in Ukraine, turning a deaf ear to US\NATO pressures.

At the same time, the Israeli executive has taken an ostensibly peace-oriented approach, which has seen Tel Aviv play the part of the country “bridging” between great powers, seeking glimpses of dialogue without compromising itself with either side. But, net of Bennet’s foreign policy strategy, there is more than a good reason to think that the Israeli way to the conflict has been dictated by primarily geopolitical drivers, i.e., structural factors. Russia’s military presence in Syria is undoubtedly the most important of these.

Ever since the Kremlin’s intervention in the context of the Syrian civil war in 2015, not only has Russia successfully carved out a sphere of influence in the country, but it has imposed itself as the most important foreign player with boots on the ground.[3] More importantly, although several additional players keep taking part in the contest for influence over Syria (e.g., Turkey, Iran, and the SDFs), Russia holds control of the skies over most of the country. Moreover, Russia’s Air Policing primacy in Syria has given the Kremlin significant leverage over neighbouring actors seeking to exert influence in the country or in desperate need to maintain positions on Syrian territory.

A country falling in the latter category is the Islamic Republic of Iran, which has made Damascus a crucial part of its Axis of Resistance, a coalition of state and non-state actors, militias, and strongholds extending into the Middle East from Tehran to Iraq, Yemen, Lebanon, Palestine and, most importantly, in Syria. Tehran, which has earned the rank of the ultimate anti-American and anti-status quo power in the Middle East ever since the Islamic Revolution in 1979, has developed a special relationship with Russia in the region.[4] Although a partnership comparable to an alliance has not been built between the two sides, Russia and Iran have collaborated in some critical crisis scenarios, not least the war on ISIS. In Syria, Tehran has deployed troops and weapon systems as well as funded proxy militias not to be ousted from the country after the acute phase of the civil war ended. Specifically, Iran holds more than one hundred checkpoints and military bases in Eastern Syria. The most noteworthy, code-named “Imam Alì Military Base”, includes thousands of soldiers, various forces, and solid fortifications.[5]

On the other hand, Tehran has secured an excellent geopolitical positioning in Western Syria through Hezbollah. Here, the paramilitary formation led by Hassan Nasrallah has established over a hundred checkpoints along the borders of Lebanon and Israel.[6] What matters more is that Hezbollah exploits its local strongholds to hit both Israeli positions and the Israeli inland. The latter constitutes a severe security threat to the State of Israel and represents a root cause of Israel’s military involvement in Syria. As a result, Russia and Israel have agreed on a security mechanism regarding Syria to accommodate each other’s priorities and minimise the risk of an (even accidental) mutual confrontation.

The agreement revolves around Russia granting Israel the possibility of violating Syrian airspace to hit Iranian or Iranian-sponsored forces on the ground. In this way, Israel gets to advance the first line of defence in Syrian territory, decreasing the enemy’s chances of launching a first strike. For its part, Russia demands that Israeli foreign policy accommodate Russian priorities and that pressure on the Damascus regime is reduced. Another advantage Russia carves out of the agreement is that Israel’s strikes weaken Iran’s leverage in Syria. Of course, a strong Iran to shield eastern Syria from U.S. influence is desirable for Moscow. Still, an Iran with reduced military projection capacities in the rest of the country is even more desirable for the Russian ruling class.

Israel’s strategic prudence vis-a-vis the Ukraine war might be better explained as a game-theoretic approach. In a zero-sum game in which losses in terms of power projection in Syria balance Israel’s gains from a tougher stand on the Ukraine war, the optimal choice is doing nothing. Preserving the status quo – which means maintaining Israel’s entente with Russia in Syria – is more desirable for the Israeli government than getting a pat on the back from Western partners while jeopardising Israel’s security interests in Syria. From this viewpoint, it seems crystal clear that, in the context of the Ukraine war, Israel’s foreign policy strategy depends on its domestic priorities and vice-versa. This trend confirms Israel’s classic intermestic approach to major foreign policy issues.

Disclaimer. The views and opinions expressed in this article are those of the author and do not necessarily reflect the official policy or position of SpecialEurasia.

This website uses cookies to improve your experience while you navigate through the website. Out of these, the cookies that are categorized as necessary are stored on your browser as they are essential for the working of basic functionalities of the website. We also use third-party cookies that help us analyze and understand how you use this website. These cookies will be stored in your browser only with your consent. You also have the option to opt-out of these cookies. But opting out of some of these cookies may affect your browsing experience.
Necessary Always Enabled
Necessary cookies are absolutely essential for the website to function properly. These cookies ensure basic functionalities and security features of the website, anonymously.
Functional
Functional cookies help to perform certain functionalities like sharing the content of the website on social media platforms, collect feedbacks, and other third-party features.
Performance
Performance cookies are used to understand and analyze the key performance indexes of the website which helps in delivering a better user experience for the visitors.
Analytics
Analytical cookies are used to understand how visitors interact with the website. These cookies help provide information on metrics the number of visitors, bounce rate, traffic source, etc.
Advertisement
Advertisement cookies are used to provide visitors with relevant ads and marketing campaigns. These cookies track visitors across websites and collect information to provide customized ads.
Others
Other uncategorized cookies are those that are being analyzed and have not been classified into a category as yet.
ACCETTA E SALVA